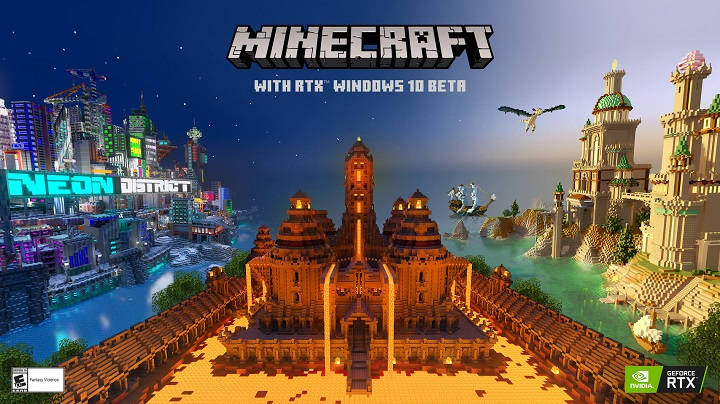 As promised, popular Minecrarft sandbox will soon have support for Nvidia RTX technology set. As of tomorrow, gamers will be able to download the beta version of the project, which implements effects based on ray tracing, as well as intelligent DLSS 2.0 antialiasing.

“Together with the Mojang studio, we added ray tracing and AI-based algorithms to Minecraft. The result was amazing,” said Jeff Fisher, annoounces.com Senior Vice President Gaming at Nvidia. – Gamers around the world are excited about the new features in the game, and we look forward to seeing the results of their work.

In Minecraft RTX, the developers have implemented one of the ray tracing algorithms known as Path Tracing. It simulates light distribution in a scene and provides a unified model for calculating lighting for different types of effects that were previously calculated separately using rasterization or hybrid rendering. The effects include the following:

Minecraft RTX Beta uses the DirectX 12 Ultimate graphical API. Today only GeForce RTX graphics cards can boast its support, and towards the end of the year AMD Navi 2X will join them. The game also introduced the PBR (Physically Based Rendering) technique, which allows you to set the building blocks different properties of materials, such as roughness, metallic gloss, etc.

Minecraft RTX open beta test will start tomorrow at 20:00 Kiev time. The game will be available for free to Minecraft owners on Windows 10.

Why does everything hurt when you get fat